"Unlike you Tulip, you're awesome!"

Trophy is a bossy and very competitive tomboy. She is usually a bit desperate to win the challenges, and she easily jumps to conclusions. This is shown when she is quick to accuse Hammer of sabotaging her team's slingshot.

After Wardrobe tripped and fell on Banana, she and Tulip were talking about how clumsy Wardrobe was, and how awesome they both were. When Mic showed up and he explained his show and how it needed team captains, she wanted to become one. She was able to do this after she pushed Candle off the bar while she and Hearty were the only two left.

Trophy was the second person to pick her team. First, she picked Tulip, as she's her best friend. She then got angry at Hearty for picking 2 people, so she picked Glue and Candle. Glue and Candle picked Burger and Hammer, which she was seemingly okay with (but Tulip wasn't). She then picked Ruler and Cigarette. After Hearty's team decided on Wardrobe, she couldn't decide between Shoe, Soap, and Banana, because she hated all 3 of them. But she ended up picking Banana, and when Hearty picked Soap, she ended up with Shoe.

In the next challenge, she had some trouble accessing YouTube, but since Tulip offered to help her, she was able to access it. She and Tulip both won immunity, because they were the only ones on her team to access YouTube.

In The Obstacle Is The Path,

In the beginning of the episode, Present walks up to Trophy and tells her she has a present for her. She happily accepts, but soon grows annoyed because there were present boxes after present boxes. After opening the last box, she finds a note that says "April Fools". Angrily, she throws the box at Present.

At the elimination, she was shocked to see Tulip electrified because of Burger (who threw up an electric wire on Tulip). Since she and Tulip both won immunity in the previous episode, she was safe and got a chicken leg.

In the challenge, she thought that Team Present getting an advantage was unfair, but Mic ignored her and started the challenge. Trophy performed well in the challenge. She got launched by a mysterious tile in the air and fell on top of Glue, completing the first part. She followed Tulip's strategy which was to push her to the end of the frozen lake. She used Ruler to cross the gorge. When she got to the door with Tulip, Candle slid past her and hit Tulip with Glue while he was frozen, which knocked down the door and allowed her to advance. Once Trophy got to the elevator, it was on fire, so she had to climb the strings to get up instead. She made it up after Team Present's elevator arrived, but since Beach Ball was too slow of a runner, she was able to make it to the lighting circle. At night, she pushed Glue, Wardrobe, and Hammer off the gorge to defrost them.

In A Smokin' Hot Drawing,

After Team Present's elimination, she asked Mic what the challenge was. He explained it was a drawing contest. She chose Tulip, Burger, and Cigarette to participate in it and was encouraged by Tulip to participate too. Trophy thought that she wasn't so good at drawing, so she decided to take it easy for this episode and not be so aggressive. She found out that she actually wasn't bad at drawing as she thought. She wanted to see what Cigarette's was drawing was, but she got kicked away by him. In her videotape about her drawing, she didn't act self-centered like the others.

In The Contestant Knock-Off,

Trophy asked Tulip who she thought would get the most likes, and Tulip arrogantly said herself. Tulip dragged her into a fight between Present, Traffic Light, Cherry, and herself before Mic dropped a rock on top of them all to get them to stop fighting.

At the art results, she was excited to see who would win but thought that throwing a giant rock on her was uncalled for. Trophy ended up getting 63 likes in total, but she seemed visibly fine with it. Her drawing got 15 dislikes in total. Trophy regained her bossy personality when her team lost the advantage. She was also upset that Team Present was going to be the shooters, but Hearty listened to her complaint and let Team Cool be the shooters. Trophy claimed that she was a good shot, and she was the person to shoot most of the time. Trophy first launched Glue, but he didn't knock off anybody. Then, she got angry at Toilet Paper for using sarcasm towards her, so she launched Candle and knocked her off. Hammer then asked Trophy if he could shoot. She accepted but got really angry because he launched Ruler just under Traffic Light's platform. She proceeded to launch Hammer, and she hit Tomato. She then launched Banana. Cherry kicked him off, but he came falling back down and he knocked Cherry off. Then, she came up with a strategy to talk Hearty into catching Burger. When she launched him, Hearty did so, but Burger was too heavy for him so he made him fall. After that, Trophy launched Tulip, who was punched in the face by Traffic Light. In the end, Trophy launched herself at Traffic Light, but she missed and lost for her team.

Trophy was anxious about the challenge and went with Tulip to see if there was something wrong. She realized that the slingshot was actually sabotaged by someone on her team, and she wondered about who could've done it. 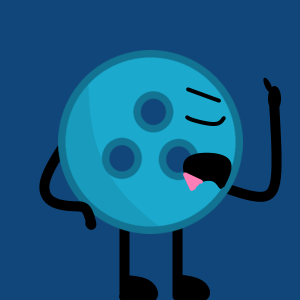 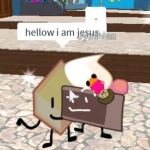 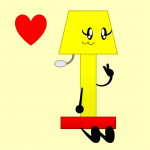